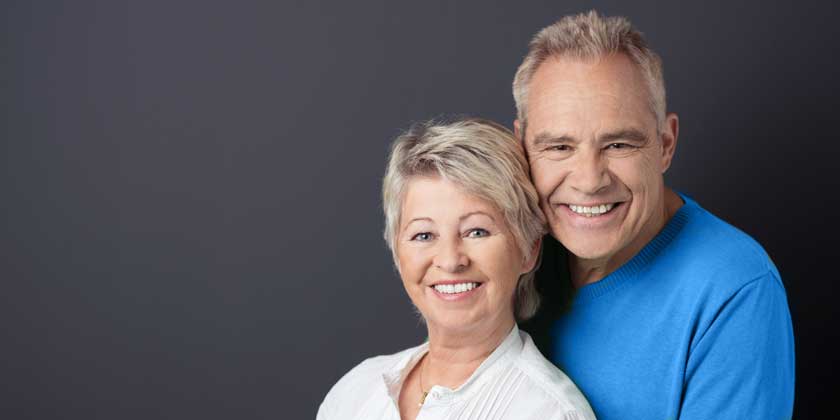 Finding love. Why age should never stand in the way

Age is no barrier when it comes to relationships — finding romance is possible for all ages, says Clodagh Finn of the Irish Examiner

YOU just never know when love can come knocking. Take widower Conor, for example: the Munster-based businessman fell head over heels at 58 and went on to become a father again. We’re talking romance, giddy moments and plenty of excitement, though it all came with lots of complications, but more about this later.

Tom, a single man in his 60s, thought he would never find love but with the help of a dating agency he met Agnes in Cork over a year ago and romance blossomed.

“It took me a long time to meet her,” he tells Feelgood. “But she was worth the wait. We go on holidays, go to concerts and the cinema together.”

Deborah Moggach says she felt like an excited teenager when she met her new man three years ago, aged 62.

“That’s the surprising thing,” says the author of These Foolish Things which was adapted into screen hit The Best Exotic Marigold Hotel. “My emotions have remained exactly the same. Will he ring? Will he put more than one ‘x’ on his text? Is that pinging email from him? What shall I wear?”
Comedian Dawn French is equally effusive at 58. Her recipe for happiness is simple: “Get divorced. Stop worrying. Have a tattoo. Love your body. Marry (again).”

She met her third husband Mark Bignell in 2011. “He’d helped me with the research for my second novel, and I was politely chatting to him while we had a cup of tea and then suddenly I saw him, really saw him, and thought, ‘Oh my God’.” She got on the phone immediately to find out if he was single and he proposed two years later in Venice on a gondola.

What an inspiration to those of us who fear that life after the half century is all about beige cardigans and sensible shoes. Okay, so you might not go on to seduce James Bond as Monica Bellucci (51) did in Spectre. Yet, it’s good to know that even in ageist Hollywood the idea that 007 has a tryst with “an adult woman” is not so outrageous.

Back in the real world, things seem far more encouraging. Gloriously so. Remember the loved-up older couple who went viral last month after appearing on the ‘Humans of Dublin’ Facebook page?
Photographer Peter Varga snapped them on the streets of the capital city and asked them the secret to a long-lasting relationship.

“Don’t ask us,” they said. “We’re a fresh couple. We’re together only six months!” They met on holiday in the Bahamas when they both missed the bus back to the village.
And why would we think that love, intimacy and meaningful relationships are the exclusive domain of the young?

Dr Sabrina Brennan at the School of Psychology and Institute of Neuroscience in Trinity College Dublin says: “We remain human irrespective of our age. We are social beings with a real need to connect with others. Sexuality in later life is taboo, which is simply ageism in action.

“Loneliness and social isolation are as bad for your health as smoking and obesity, so anything that addresses that is a positive that should be encouraged in my book.”

Feargal Harrington, who founded Dublin-based dating agency Intro with his wife Rena Maycock, says loneliness is often what prompts older people to sign up to a dating agency. Sometimes that decision can take years, he says, as confidentiality and the fear of being conned online are big concerns.

“A lot of our older clients, if they are widowed, separated or divorced, are concerned that their children might be affected. Others simply don’t want to become gossip at the parish pump,” he says.
Catholicism can also be a hurdle for some older people, who won’t date those who have been married before. The number one issue, however, is smoking.

“It’s the one thing both men and women say they do not want in a partner so, at times, it’s a challenge for us to find matches for clients who smoke,” says Harrington.

Yet people do find love in their 50s, 60s, 70s and beyond. Increasingly so, in fact. Due to the introduction of divorce 20 years ago, the number of second relationships are increasing. According to the ERSI in 2011: “In one quarter of cohabiting couples at least one partner was previously married.”

Love in later life can be an unpredictable and dazzling affair, but it does come with far more complications: older lovebirds are often trailing the messy business of their previous lives behind them.

Older people tend to make decisions more quickly, too, so adult children can think they are losing the run of themselves.

“There is a settling-in period, which can be challenging,” Ryan explains. At first, a new couple wants it to be like The Brady Bunch, then they become more realistic and tackle the issues —adult children; sharing a living space; sexual expectations; even sexually transmitted diseases, which are on the rise among older people here; dealing with guilt if a previous partner has died, or jealousy among new partners.

THE latter was an issue for Conor who was widowed at 42 when his children were just eight and 10. His work meant he might be in New York one week and Singapore the next but he had to abandon all of that to become mother and father to his two children.

When he first lost his wife, he was shocked to find that single women considered him “eligible and housetrained” and sought him out, pushing their phone numbers through his letterbox. Other widowers told him they had similar experiences. However, he did meet someone quite quickly after his wife’s death and was soon in a new relationship.

“I think men and women cope with grief quite differently. Men move on more quickly. I think I also appreciated how short life could be and that you have to get out there and enjoy it.”

That relationship ran its course and more than a year later he met another woman and “fell head over heels in love”. They moved in together, had a child but later split up. Looking back now, Conor says the relationship was “disastrous” and he is still dealing with the fallout. His former partner found it difficult to accept that he had a past and insisted he remove all traces of his late wife from the house.

The split was acrimonious and has left him feeling cautious, though certainly not unbowed. He’s been back online and recently met a woman for coffee and a walk. It went well and there might be a second meeting.

His focus, though, has shifted. His children are a priority and he finds that is the case too for many others online. “The world of dating at this age is more complicated” he says, though it hasn’t put him off.

When he and his wife were in their 30s, they used to socialise with a couple in their 50s who met through an introductions agency.

“They were like teenagers and they are still together now more than 20 years later. I’d like a piece of that please.”

CASE STUDY: Ann is still keeping an eye out

Ann Murphy, 55, has seen it all on dating websites: The men with false profiles, the ones who are looking for money, the younger men who hit on ‘mature’ women for sex, the chancers.

“There are so many chancers,” she says, though that hasn’t completely turned her off the dating game.
She has had two long-term relationships, both 13 years, but has been single for the last five years. She did meet one nice man online five years ago and they dated for six months. Since then, her most recent successful date was last summer. Now, she is just looking for someone on the same wavelength who shares her interest in good conversation, nature, theatre, cinema, and good food. “I don’t care if he is a millionaire or on social welfare but I would like someone to be reliable and trustworthy and that is so hard to get today.”

She says the sexual aspect is much less important now; that it’s more about connection and mutual respect. For now, she’s not on any dating websites, though she continues to study new technology at the Access IT in Waterford, a community-based IT training centre, and says her life is perfectly fulfilled and happy as it is. And yet, she adds with a laugh, she’ll still keep one eye open. Just in case.

Life is too short to waste, says Feargal Harrington of Dublin-based dating agency Intro (www.intro.ie). If you’re looking for a relationship, it’s time to: